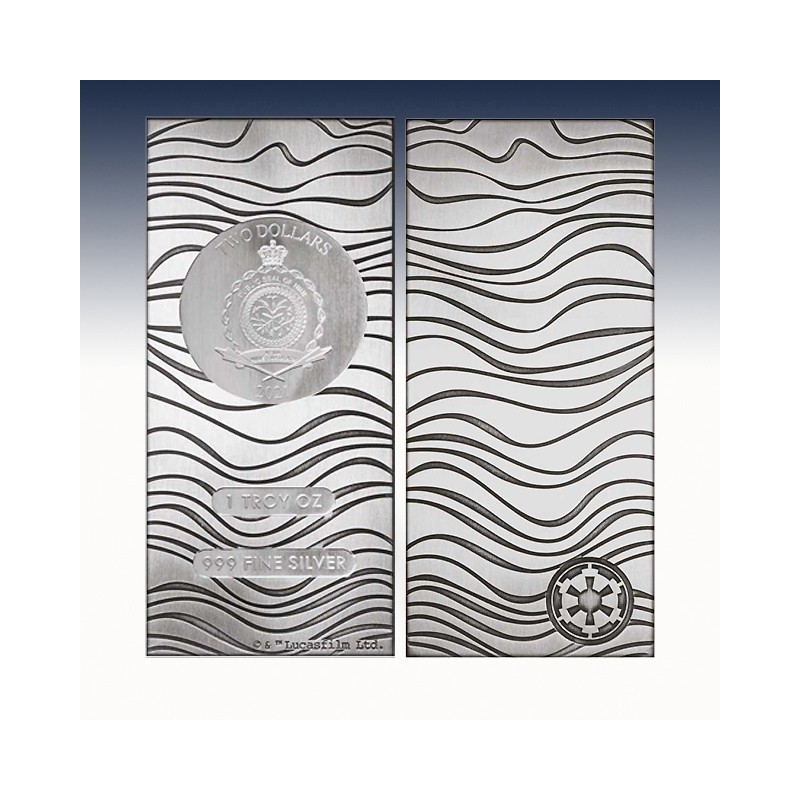 Mandalorian body armor is made of one of the most precious metals in the galaxy. When not being used to protect the famed bounty hunter they are melted down into Beskar ingots for exchange. Now you can own precious metal "Beskar Bars" of real value!

This officially licensed STAR WARS™ - Mandalorian™ Antique finish coin was struck from 10 ounces of 99.9% silver and replicates an ingot of Mandalorian iron Beskar.

The coin features the characteristic wave shape that Beskar ingots are stamped with, and also includes the logo of the Galactic Empire. The reverse features the Niue coat of arms as well as the denomination, year of issue, weight, fineness and official copyright.

Beskar is an extremely strong alloy that was used in Mandalorian armor and was characterized by a high tolerance to damage of various kinds.

Thus, the metal was durable enough to withstand a direct blaster shot and repel lightsaber strikes.

It is not without reason that Beskar is one of the most valuable metals in the entire galaxy.

The Mandalorians have an almost religious relationship with Beskar and are convinced that it belongs exclusively in the hands of their people.

With this highlight for fans of the STAR WARS™ - Mandalorian™ series, collectors and investors now have the opportunity to bring the legendary bar into their possession.

The uniquely shaped Antique Finish coin is delivered in a protective coin capsule.