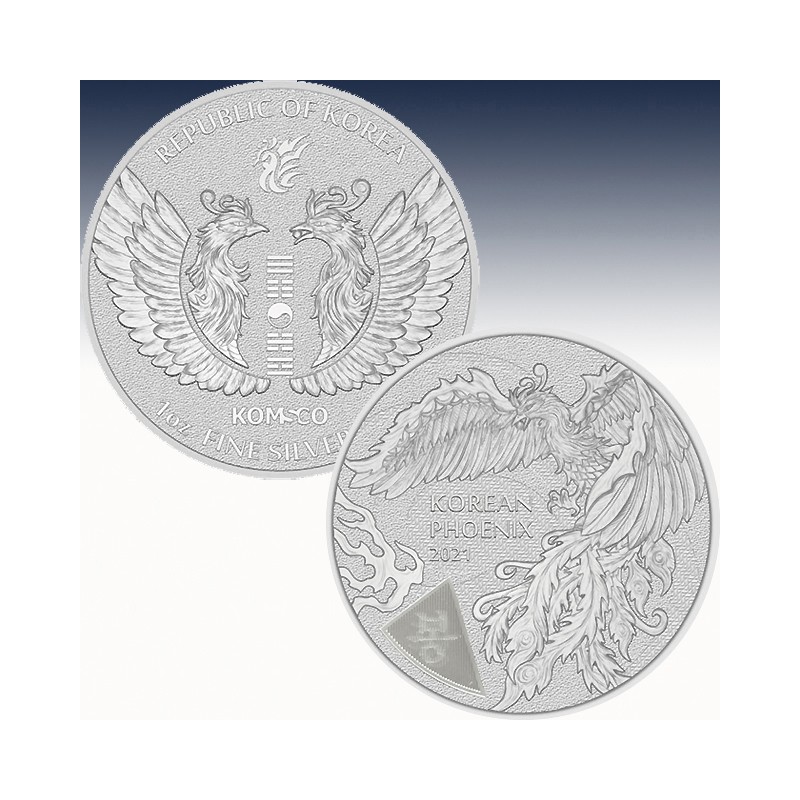 These remarkable creatures have played a large role in Korean history, particularly for emperors and other royal figures. Today, the Phoenix is even featured on the South Korean Presidential Seal. Right now, 2021 1 oz South Korean Silver Phoenix Medals are available to purchase online from JM Bullion.

While the Phoenix is said to have originated in Greek, Roman, and Egyptian myths, this magical bird has found its way into other cultures as well. In South Korea, the Phoenix has been an important symbol for the country’s leaders for hundreds of years. Known there as Bonghwang, this incredible bird possesses unique resurrection abilities and has come to symbolize renewal and rebirth. If you visit the president’s house known as Cheongwadae, you will find a beautiful statue of a Phoenix on the premises.

The obverse of 2021 South Korean Silver Phoenix Medals depicts a Phoenix in flight. The bird is shown with its wings spread wide, its talons extended, and its stunning tail feathers hanging below. You’ll also find a latent security feature struck directly into the medal in a triangular shape. It includes a vertical line pattern revealing the Korean symbols for Bonghwang upon adjusting the angle. The words Korean Phoenix 2021 are inscribed above it.

On the reverse image of the 2021 1 oz South Korean Phoenix Medal is a motif of the official President Seal of South Korea. This design includes a pair of Phoenix birds facing each other with a Yin-Yang symbol between them. Along the sides are the country of origin, mint, weight, metal type, purity, and year.

Each 2021 1 oz Silver Phoenix Medal is delivered to you in Brilliant Uncirculated condition. This means you will receive a nearly perfect specimen. These medals arrive individually in plastic flips. Groups of 25 will come in a tube, while orders of 250 medals are delivered inside a box. The box contains a total of 10 tubes.