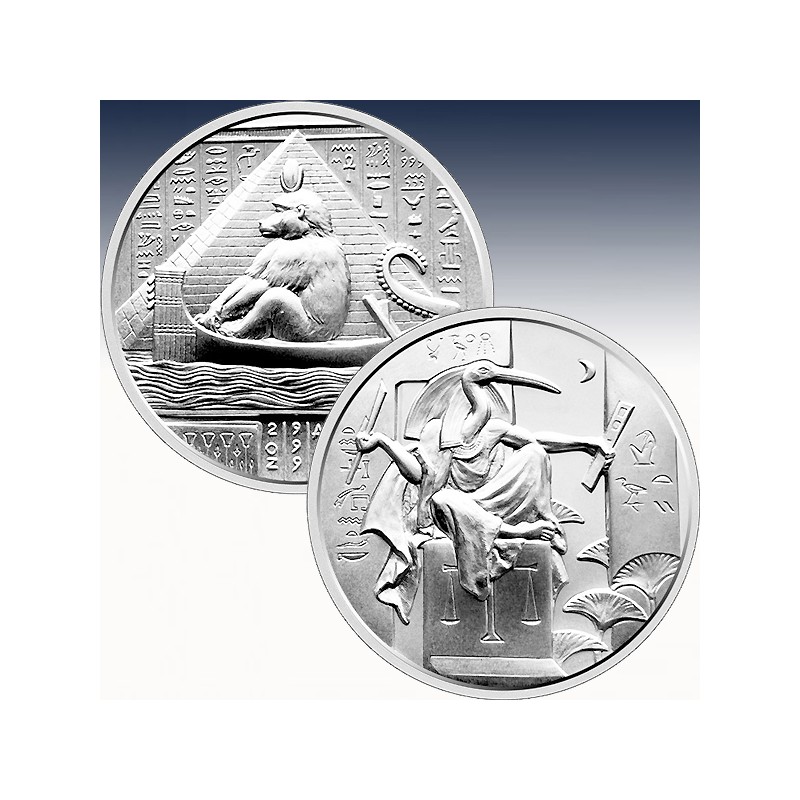 The exciting and popular Egyptian Gods Series of custom silver rounds is back with its next design, and this time it features a deity from Egyptian mythology that not everyone is likely to know. The Egyptian god Thoth is the focus of the eighth release of the series.

Like many other Egyptian deities, Thoth fulfills many roles throughout Egyptian history. He is known as the god of the moon, mathematics, science, and magic. However, his most notable role is that of a scribe. He is known as the one in charge of sacred texts and is the recorder of the deities.

Thoth is seated on a throne in the obverse design of the new 2 oz Thoth Silver Round. He is captured in his common human-like form with the body of a man and the head of an ibis, one of two animals associated with Thoth in Egyptian symbolism. He holds in his hands the tools of an Egyptian scribe, a nod to his role as the recorder of the deities and master of knowledge. This side of the round has the cartouche hieroglyphs used to represent Thoth in written Egyptian records.

For the reverse design, the 2 oz Thoth Silver Round features the image of a baboon. The baboon is the all-animal form that Thoth often takes and it is shown here seated in left-profile relief. The baboon is seated in a boat.