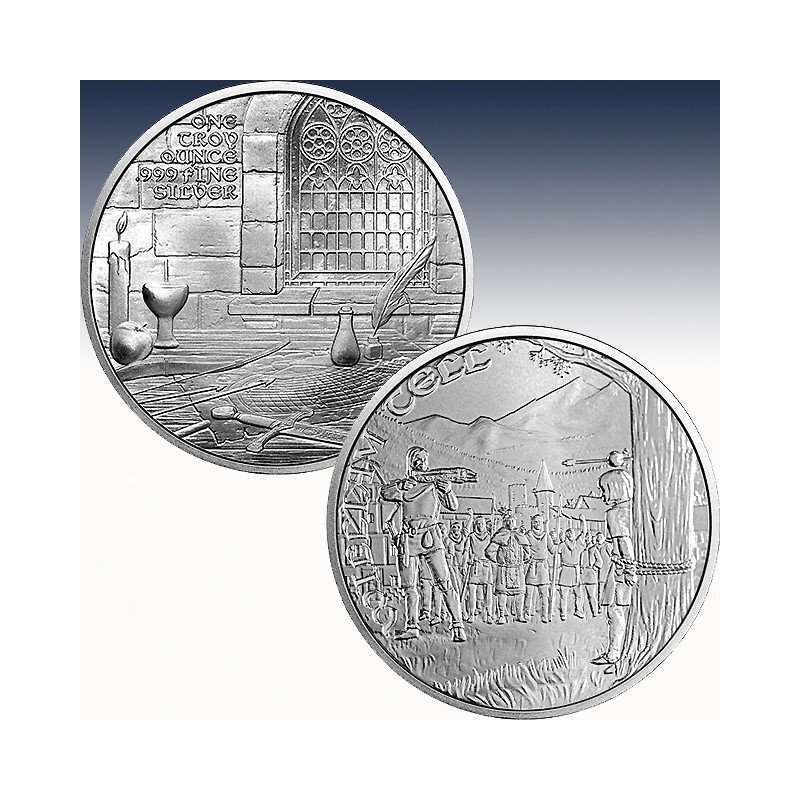 William Tell is nothing short of a national folk hero in Switzerland. Though his tale is often told as a 13th-century story of Swiss resistance to Austrian occupation, it has been repurposed as recently as the 19th century as a symbol of Swiss independence. Today, 1 oz Medieval Legends William Tell Silver Rounds are available to you online at JM Bullion.

Stores regarding the legend of William Tell were first written in the 15th century, though these early references did not name Tell specifically. By the late 16th century, the name William Tell had been attached to the exploits of a legendary mountain climber and crossbow expert who galvanized Swiss peoples against the invading Austrians.

All of these 1 oz Medieval Legends William Tell Silver Rounds are available to you in plastic flips. Multiples will arrive in protective tubes of 20 rounds or in boxes of 500 rounds. Each box holds a total of 25 individual 20-round tubes.

On the obverse of the new Medieval Legends William Tell Silver Round, you will find a portrait of William Tell surrounded by townspeople. These individuals have gathered around to watch William Tell strike an apple off his own son’s head with a crossbow. Though his legend first appeared in writing in the 15th century, the tale is often said to be set in the 13th century.

Though the incident involving Tell’s skill in shooting an apple off his son’s head is at the heart of his legend, he is also widely regarded as a folk hero in Switzerland for different reasons. The apple incident was just one part of Tell’s resistance to the Austrian invasion of Switzerland. His resistance would lead to a popular rebellion that would force out the Austrians and result in the formation of the Old Swiss Confederacy.

The reverse side of the 1 oz William Tell Silver Round comes with a depiction of a table setting in a Medieval castle. This setting looks humble, but each relic reflects a figure in the Medieval Legends Series. This includes the famed apple that William Tell shot from his son’s head.