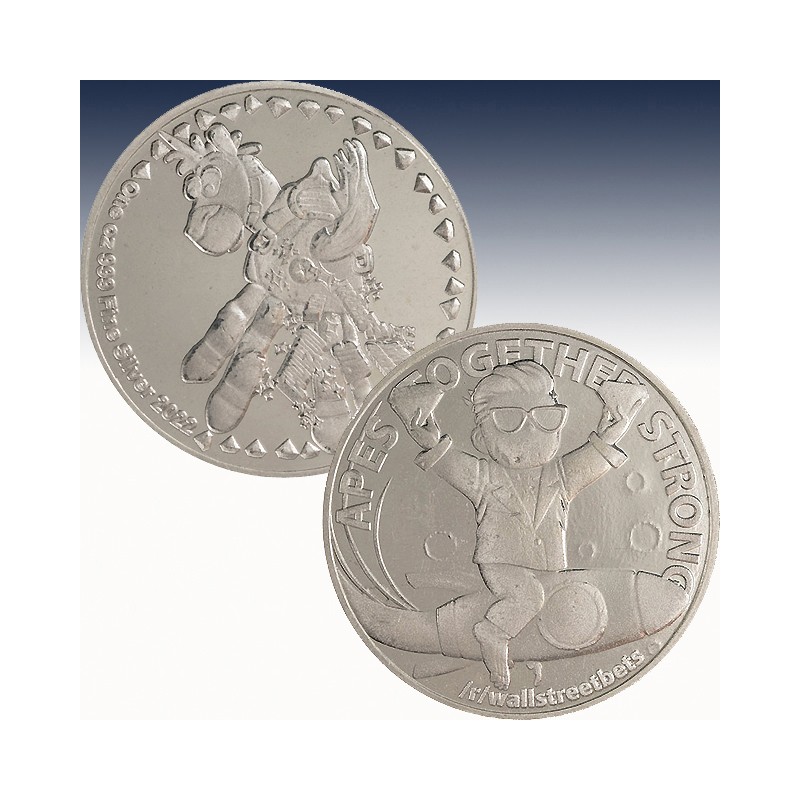 The viral Internet meme comes together with the precious bullion collectible with this unforgettable silver medallion. Originating with a memorable quote delivered by the ape Caesar in the 2011 film Rise of the Planet of the Apes, the meme “Apes Together Strong” quickly outgrew its source material to become a free-floating and sometimes-humorous expression of solidarity. It particularly took hold in the /r/WallStreetBets community on Reddit, where it became a popular rallying cry during a controversial burst of “meme stock trading” aimed at sabotaging attempts to “short-sell” certain stocks by hedge funds and big firms. The underdog spirit of Redditor “meme trading” is celebrated gleefully by the 1 oz Wall Street Bets Apes Together Silver Round.

A uniquely 21st-century phenomenon, “meme stock trading” first took hold during the COVID-19 pandemic and saw small individual investors with smartphone investment apps and plenty of time on their hands flood into financial markets with unprecedented results. Captivated by the idea that the “little guy” could use stock trading to stick it to big firms and investors who were short-selling the stocks of struggling companies, these “retail investors” spectacularly propped up the stock of embattled retailer GameStop for a significant span of time, and despite the controversy surrounding the practice it has continued to generate waves of market activity apparently unrelated to the real value of the companies involved, as a way of “sticking it to the man.”

The phrase “Apes Together Strong” has become closely associated with this kind of populist market activity and is commemorated by the Wall Street Bets Apes Together Silver Round. Featuring playful artwork, these rounds ship with individual flips, acrylic tubes of 20 rounds, or boxes of 500 silver rounds.

The round’s artwork features a boy in sunglasses riding a rocket ship and carrying enormous diamonds in each hand, the image of the proverbial “little guy” riding the meme trading craze on his way to fortune. At the rim appears the inscription “Apes Together Strong,” as well as the smaller inscription “/r/WallStreetBets.”