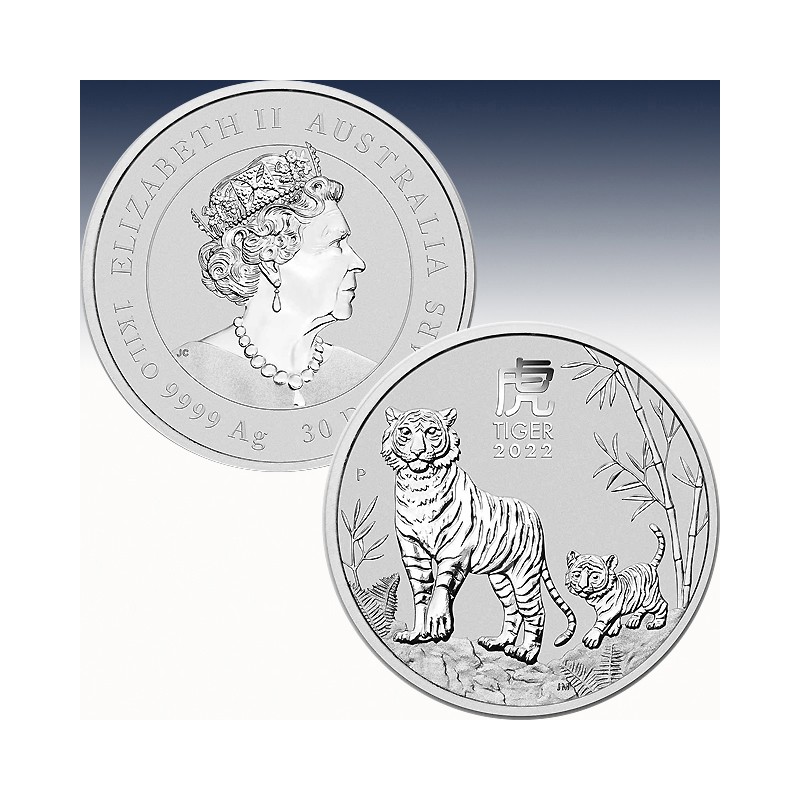 These magnificent Silver coins celebrate the year 2022 as the Year of the Tiger and the third release in Perth's Lunar Series III.
These beautiful Silver coins celebrate the Year of the Tiger, the third animal in the 12-year cycle of the Chinese zodiac, and are a part of the Perth's Silver Lunar Series III. A landmark coin series of the highest regard, the Perth Lunars package beautiful designs, limited mintages and universal appeal all in one program.

Struck by the historic Perth Mint from .9999 fine Silver, each coin's Australian legal tender status guarantees its weight and purity.

Perth Mint's Australian Lunar Series III collection continues the rich tradition of minting spectacular bullion coins by portraying animal themes from the Chinese Lunar calendar. The reverse design changes each year based on the Chinese lunar calendar, and the 2022 reverse celebrates the Year of the Tiger. Those born under the sign of the Chinese lunar Tiger in 2022, 2010, 1998, 1986, 1974, and every 12th preceding year are said to be natural leaders, blessed with courage, charm, and confidence. Tigers are seen as guardians of children in Chinese culture, and are a symbol of bravery.

The Perth Mint Lunar Series
Known for their quality and collectibility, the Perth Mint Lunar series is a cornerstone of many Precious Metals portfolios, and produced in Silver, Gold and Platinum. The original Lunar bullion series, these coins (beginning with the Series I launch in 1996) have become some of the most widely collected around the globe, as demand originated in Asia but spread to Europe and America as investors became exposed to the design and quality. In addition to the annual design change, many investors love that the coins' select mintage limits create the potential for even greater investment return in the form of a numismatic premium appreciation. This series is so popular, the 1 oz Gold and Silver Lunars are now instant sell-outs every year!

The Perth Lunar Series 1 concluded in 2010, and Series II concluded in 2019. These releases have been tremendously popular worldwide, with each year selling out quickly as investors and collectors claim the coins of all sizes. As each 1 oz Silver bullion coin in Series III has been limited to 300,000 coins worldwide, the prolonged popularity is ensured by the high level of collectibility as well as the stellar designs from the reputable Perth Mint.