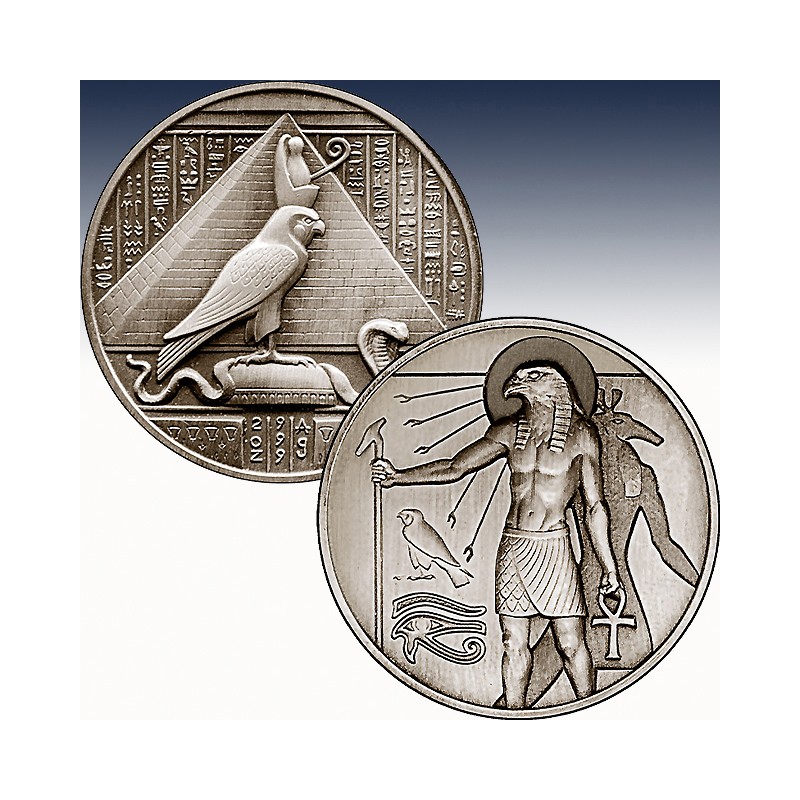 The Egyptian Gods Series moves to its seventh release with a new design honoring the god Horus. Most notably referred to as the God of Kingship, many Egyptian accounts of Horus have him closely associated with the ruling pharaohs in life, though it is his father, Osiris, that the pharaohs are associated with in death. Today, 2 oz Antique Horus Silver Rounds in the Egyptian Gods Series are available at JM Bullion.

All of these 2 oz Antique Horus Silver Rounds are available to you for purchase with individual plastic flips or acrylic tubes of 10 rounds. These particular specimens are antique rounds with a special polish that delivers an ancient visual finish. The rounds are struck in ultra-high relief, creating a greater 3D effect on the designs and enhanced visual depth for the background field.

In the obverse design of the Antique Horus Silver Round, you will find the image of Horus as depicted in human form. With the body of a man, Horus has the head of a falcon and clutches a staff in his outstretched right hand. Set, his antithesis in the afterworld, looks on from the shadows. The field includes the falcon hieroglyph that often represented Horus in Ancient Egyptian texts. Additionally, the famous Eye of Horus is also captured on this side.

For the reverse design field of 2 oz Antique Horus Silver Rounds, the design captures Horus in hieroglyph form. That is to say, he is shown here as a falcon that sits in right-profile relief wearing the pschent, a double crown representing the pharaohs who ruled over Upper Egypt and Lower Egypt. There is a cobra beneath the talons of the falcon and a pyramid in the background.