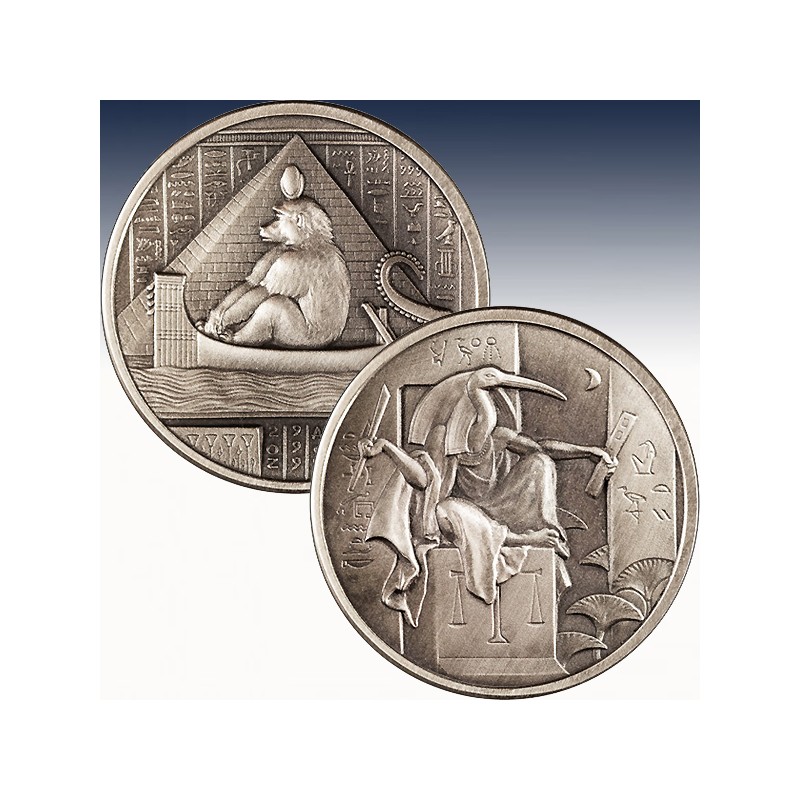 Thoth is the next design of the coveted Egyptian Series of silver rounds. These 2 oz silver pieces offer a continuation of a series that started years ago and was recently relaunched with the same designer at the helm, Heidi Wastweet. The silver rounds feature high-relief visuals in BU and antique options.

For the eighth release of the Egyptian Gods Series, the designers and the mint offer an effigy of Thoth. Though he had many roles in Egyptian mythology, just like other deities, Thoth is most remembered for his role as a scribe and the recorder of the deities. He was worshipped as a master of knowledge and the patron of scribes.

All of these 2 oz Antique Thoth Silver Rounds are available to you for purchase with individual flips. Multiples will arrive in plastic tubes of 10 rounds. Additionally, these rounds have a high-relief strike and an antique polish. The strike delivers greater visual depth with improved 3D relief on the design elements. The antique finish creates a piece with a patina of age.

On the obverse of Antique Thoth Silver Rounds, you will find a depiction of Thoth in his human form. Here, he is shown seated on a throne with the head of an ibis, one of the two animals associated with Thoth. As a scribe, Thoth keeps the records of deities and is shown in this design field with depictions of the tools of a scribe. The hieroglyphs from Thoth’s cartouche are also featured on this field.

The reverse side of the 2 oz Antique Thoth Silver Round comes with an image of Thoth in his common animal form. Here, a baboon is seated in left-profile relief on a small boat. The background field has the common pyramid design scheme and wall of hieroglyphs found in all of the designs of the collection.