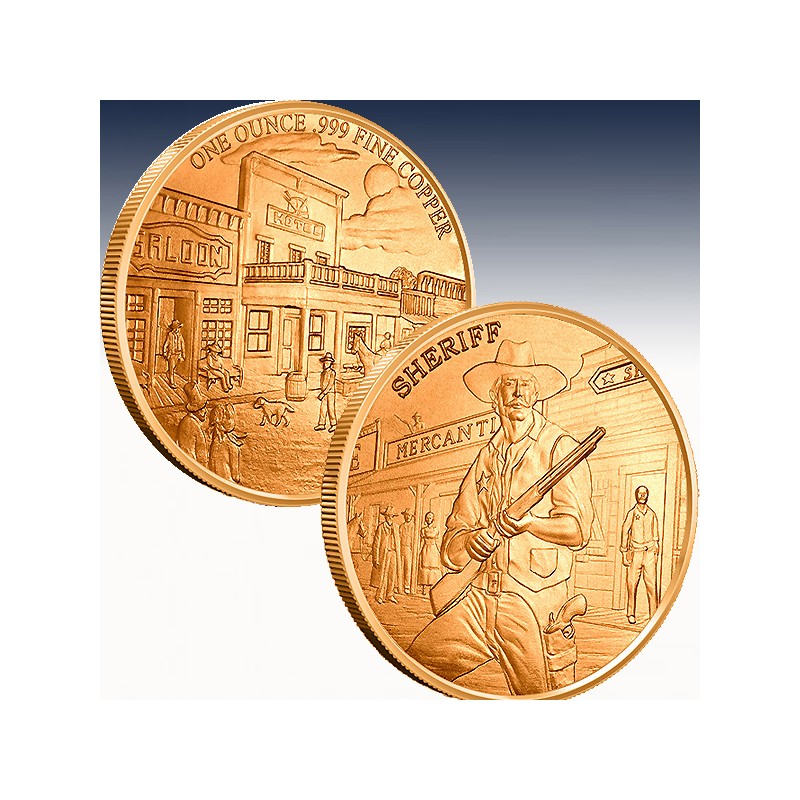 The American West was a rough-and-tumble place. Everyone that moved West in the mid-19th century was looking for the same thing: a fresh start. From ranchers and farmers to merchants and entertainers, everyone was looking to open a new chapter on their life, including criminals. In the early days of the American West, there were no local governments to create and enforce laws, and no one to elect lawmen. Fortunately, there were equally rough-and-tumble men up to the job of pinning on that Sheriffs badge to uphold the law and keep the criminal element in check. Provident Metals is pleased to offer the latest design in its Prospector Series with the 1 oz Copper Prospector Series Sheriff Round available to purchase online.

When you purchase the all-new 1 oz Copper Prospector Series Sheriff Round available in this Provident Metals listing, you are receiving a copper piece with the latest design in the Provident Metals Prospector Series. Each copper round is available to you in Brilliant Uncirculated condition with individual rounds housed in plastic flips. Multiples come in either plastic tubes of 20 or Monster Boxes of 500 copper rounds. The box holds 25 separate 20-round tubes.

The obverse of 1 oz Copper Prospector Series Sheriff Rounds comes with a depiction of a tough, stoic Sheriff stepping up to defend law and order in his town. The sheriff has his gun drawn and is staring down an unseen criminal element. One of his deputies is at the ready in the doorway to the Sheriffs office just over the Sheriffs left shoulder, while another one of his deputies is providing cover fire from above the Mercantile shop over the Sheriffs right shoulder. The inscription accompanying the design on this side reads Sheriff.

On the reverse side of Copper Prospector Series Sheriff Rounds features everyday life carrying on along the Main Street of an American West town. Here, people stroll along the dirt road near the Hotel and Saloon, with some patrons headed out of the saloon as others are just ambling through town. The inscription at the top reads One Ounce .999 Fine Copper.

The height of violence in the American West came after the US Civil War. Millions of American men had served in the Civil War for the Union Army and the Confederate Army. After the war, vast stretches of the South, in particular, were left in ruin and hundreds of thousands of former soldiers had nothing to do and new-found skills with a gun. Many of these men went West in search of a new start. Those who could find a trade and had no means to start a business hired themselves out as gunslingers, creating a lawless environment in the process as people took matters into their own hands. It was up to the Sheriffs to try and keep the peace.