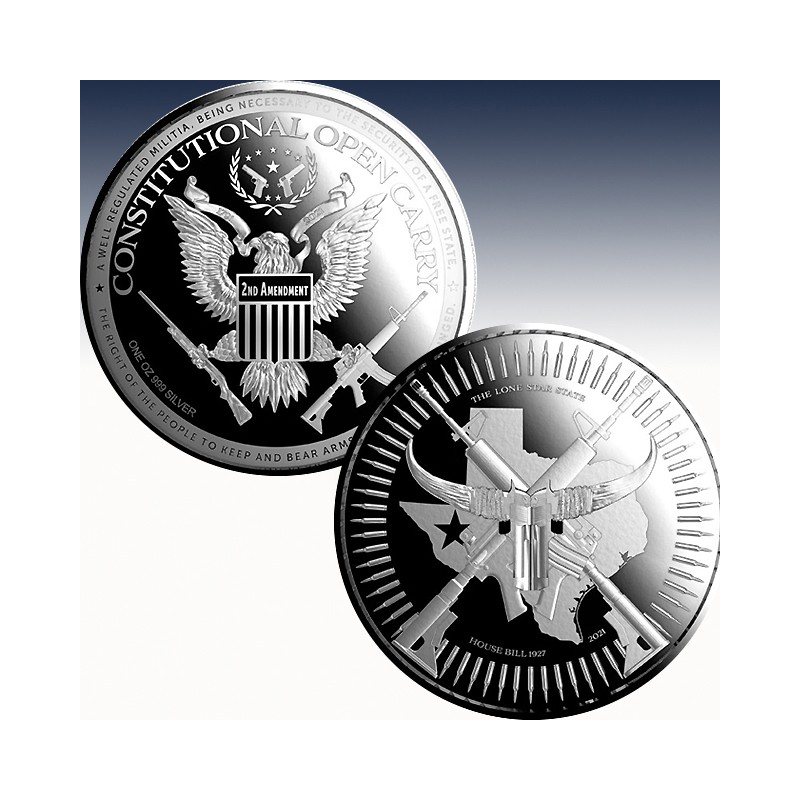 One of the most important dates in American history was December 15th, 1791. On this day, the Bill of Rights was ratified by the states, allowing for 10 amendments to the US Constitution. The second of these amendments declared that citizens of the United States had the right to bear arms to defend themselves when necessary. Right now, 1 oz Constitutional Open Carry Silver Rounds are available to purchase online from JM Bullion.

These Constitutional Open Carry Silver Rounds have been struck in .999 pure silver and will arrive in New condition. All rounds in this listing will arrive protected in plastic flips individually. Multiples come in tubes of 20 or boxes of 500.

On the obverse of 1 oz Constitutional Open Carry Rounds there features a Texas firearm emblem. This insignia consists of an outline of the state of Texas, two firearms forming an X, and a Texas longhorn. An ammunition pattern is arranged along the edge, and there are inscriptions reading The Lone Star State, House Bill 1927, 2021.

The reverse side of 1 oz Constitutional Open Carry Silver Round features an American bald eagle with firearms in its talons. On its chest is a shield that says 2nd Amendment, and above it, there is a wreath laurel and the dates 1791, 2021. There are reverse inscriptions reading Constitutional Open Carry, 1 oz .999 Silver, and on the outer rim, you will see the words of the 2nd amendment in its entirety.

The American Revolutionary War occurred between the years of 1775 and 1783. When the war was over, the Founding Fathers went to work on figuring out how to run their newly independent land. One of the key issues was the role of the military and the question of citizens bearing arms. While there was disagreement between the Federalists and Anti-Federalists regarding state militias and government armies, they both agreed that ordinary citizens had the right to protect themselves against tyranny. This idea was eventually cemented in 1791, when the Bill of Rights was ratified. The second amendment in the bill declared that citizens had the right to bear arms, and that such a right could not be infringed upon by the government.