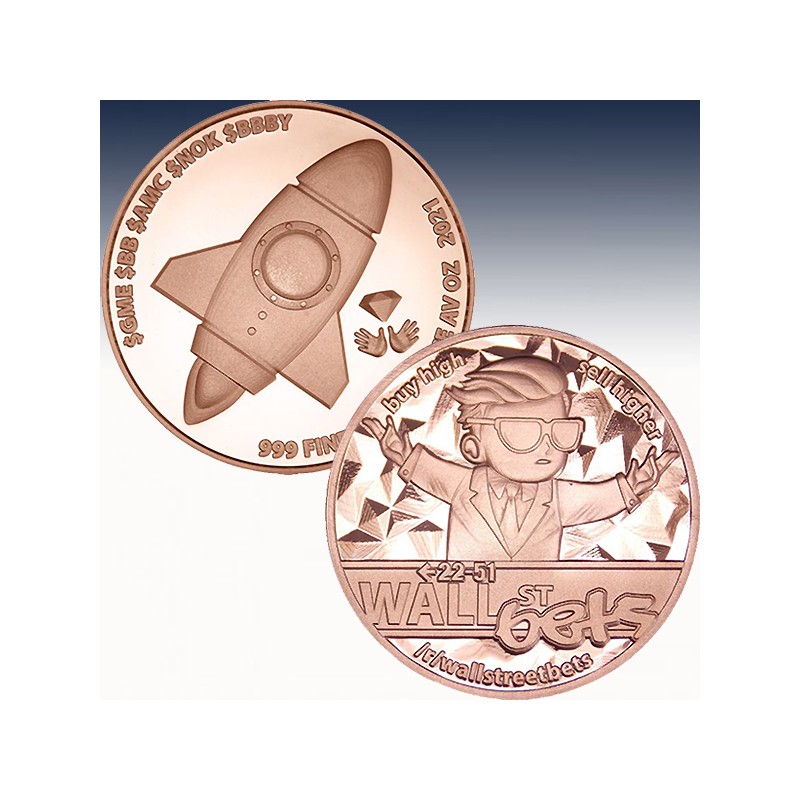 If you havent heard of Wall Street Bets on Reddit prior to 2021, you are no doubt familiar with the subreddit after the wild ride its users took the stock market on for several days in late January and early February. Fresh off the impression this group of Redditors made on the world in early 2021, the group is now immortalized in the form of silver and copper rounda from the Blockchain Mint. Today, 1 oz Wall Street Bets Copper Rounds are available to you online from JM Bullion.

WallStreetBets, as the subreddit is officially known, is at its core a place for users to discuss stock and option trades. Though it recently shot to prominence in the national conversation in January and February 2021, the group is almost a decade old. It was founded in January 2012 by Jaime Rogozinski. As of February 2021, there are an estimated 8.9 million active users on the subreddit.

All 1 oz Wall Street Bets Copper Rounds available in this product listing come in brand-new condition from the Blockchain Mint. The rounds are packaged individually inside of plastic flips, with multiples packaged in tubes of 20 or boxes of 500. The box of 500 rounds has 25 tubes of 20 rounds each.

The obverse of the 1 oz Wall Street Bets Copper Round features the well-known banner and logo for the channel on Reddit. The design features a figure wearing a suit, tie, and sunglasses with his hands out wide to his sides. The iconic street sign for Wall St. in New York City is featured, with the word bets spray-painted over the end of the sign. The subreddit link is included along the bottom of the design rim.

On the reverse side of Wall Street Bets Copper Rounds is the image of a rocket ship with a pair of hands below a diamond. The notable inscriptions on this side of the round include dollar signs in front of four stock listings, those for GameStop, Blackberry, Nokia, and Bed Bath & Beyond. GameStop was famously targeted by the WSB users in a short squeeze move to inflict pain on Wall Street firms hoping to capitalize on the hard times that GameStop has suffered in recent years.