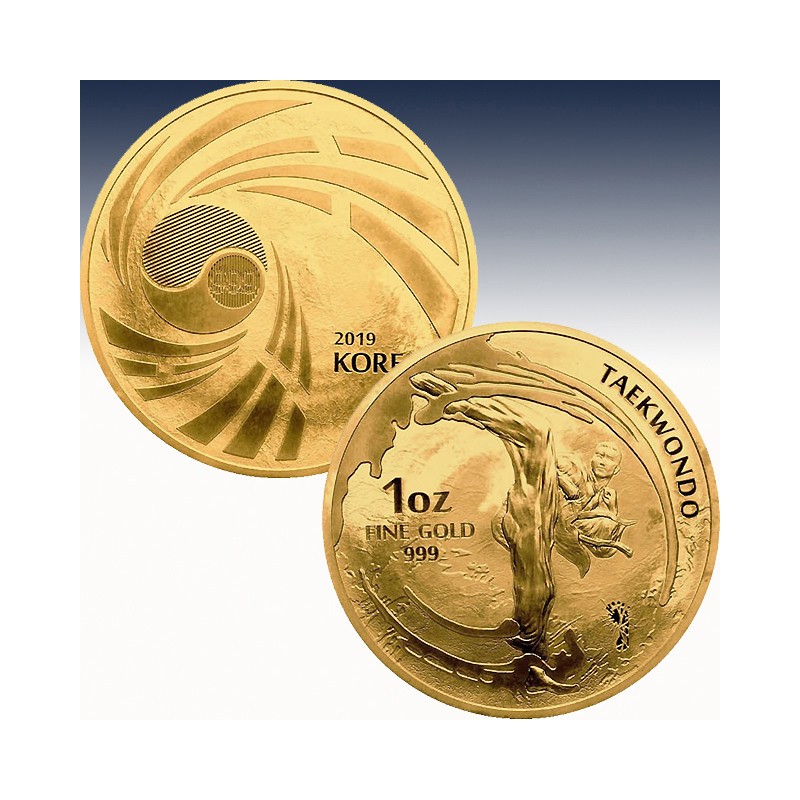 The form of Taekwondo is characterized by the use of head-height kicks and fast kicking techniques. The governing body of the sport is the Korea Taekwondo Association, which was formed in 1959 by the nine original kwans that developed the martial art. Kwans are martial arts schools.

On the obverse of the 2019 1 oz South Korean Gold Taekwondo Medal is the image of a martial artist practicing taekwondo. This individual showcases some of the most common moves of the art, including the head-height kick. Other characteristics of taekwondo include jumping and spinning kicks.

The reverse field of 2019 South Korean Gold Taekwondo Medals includes the Taegeuk. This symbol that includes the yin and yang symbols combined in a circle is the national symbol of the Republic of Korea. It features prominently with blue-and-red colorization on the national flag of South Korea. The KOMSCO latent security image is also featured on this side of the gold medals.

These 2019 1 oz South Korean Gold Taekwondo Medals are available to you with individual protective plastic capsules. This first release of the Taekwondo design is available in Brilliant Uncirculated condition and has a very low mintage figure, so dont be surprised if these go fast!

KOMSCO is the official minting and printing organization for the Republic of Korea. A government-owned company, KOMSCO produces bullion coins and paper banknotes, as well as government paperwork such as passports.