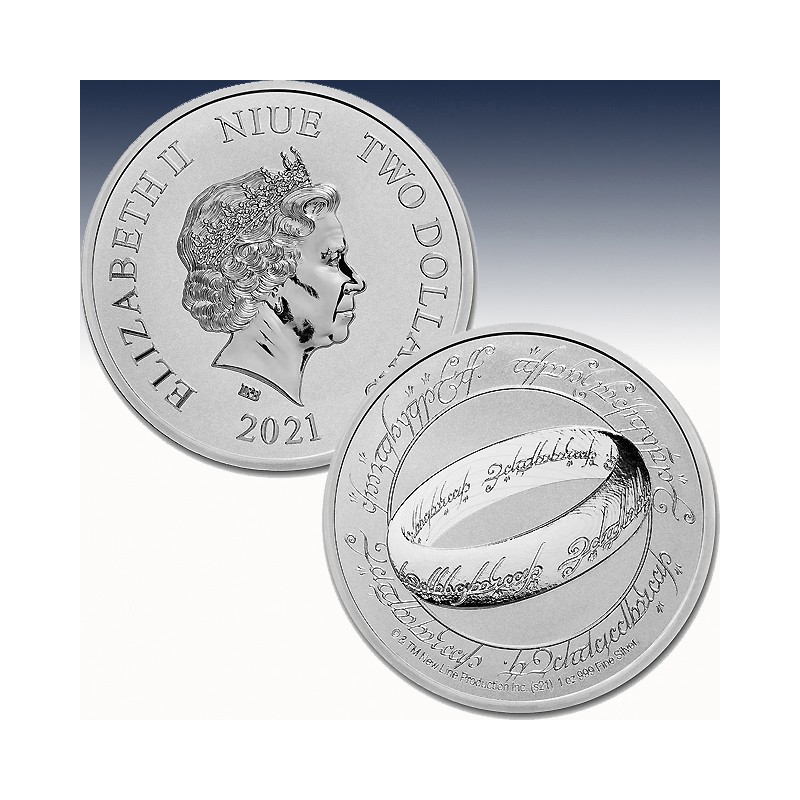 One coin to rule them all! Celebrate 20 years of the Lord of the Rings Films by Peter Jackson with this limited mintage Silver coin!

The Lord of the Rings Films and The One Ring
Peter Jackson's work of adapting to film J.R.R. Tolkien's Lord of the Rings books began in 1997 and came to life when The Fellowship of the Ring was released in 2001. The first film of the trilogy introduced the cast and the threat that Middle Earth faced from the land of Mordor and the Dark Lord Sauron. This film was a huge success with over $897 million at the box office. Viewers were amazed by the beautiful scenery of Middle Earth, mythological creatures and relatable characters working to overcome the conflict they encountered. Two more films were released for The Two Towers and The Return of the King, both of which pushed the limits of film with the creation of colossal warring CGI armies. The Lord of the Rings films are praised as tributes to the books and a riveting adventure for the audience.

The most iconic element from The Lord of the Rings is The One Ring of power, crafted by the Dark Lord Sauron. Sauron was one of the Maiar, in the same class as wizards like Gandalf. Sauron served as the top lieutenant of Morgoth, the greatest evil that ever befell Middle Earth. Morgoth, previously known as Melkor, was one of the Valar, who were powerful beings that oversaw the creation of the world, but Morgoth disrupted the music of Eru Iluvatar and created terrible evils. Sauron's service to Morgoth bestowed upon him tremendous power through the black arts. Following Morgoth's banishment, Sauron hid from the other Valar to begin plotting his own conquest of Middle Earth.

When he reemerged, Sauron introduced himself to the peoples of Middle Earth as a fair and wise teacher who offered knowledge and skill to men, dwarves and elves to create rings of power. 9 were made for the race of men, 7 for the dwarves and 3 for the elves. Sauron worked in secret to create a master ring that could control all the other rings of power. His plot worked, but not before the elves sensed his treachery and removed their rings before he could bind them to his will.

An alliance of elves and men conquered Sauron, as the precious ring was cut from his finger by Isildur, and Isildur failed to cast the ring into the fires of Mount Doom. The story begins in the Third Age, thousands of years later when Sauron has rebuilt the fortress of Barad-dûr and grown in power sufficient to begin looking for the ring that Frodo's uncle Bilbo had found decades earlier. The story centers upon Sauron's ring of power and the events described are called the War of the Ring. Frodo  is tasked with destroying the ring and sets out with a fellowship to assist him in the quest. Eventually, the ring's destruction defeats Sauron. This unique coin features the ring of power, as well as the Black Speech of Mordor, reading "one ring to rule them all, one ring to find them, one ring to bring them all and in the darkness bind them." Get this one coin to rule them all and add it to your collection!