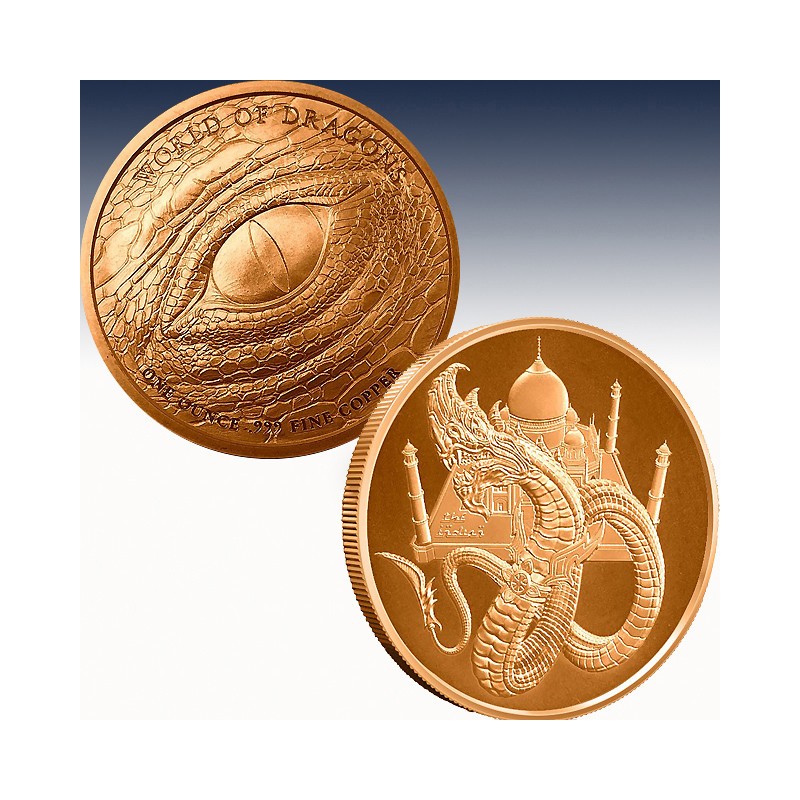 "5# The Indian- World of Dragons Series"

This item is on Presale and we expect to begin shipping orders on or after November 13th, 2019. Any order containing this item will wait until November 13th, 2019 to ship. This ship date is an estimate and may vary if the mint fails to deliver the item to us on schedule.

Dragons are one of the most feared beasts in all of humanity, even though the beasts that haunted the minds of cultures around the world are the stuff of myths and legends. The World of Dragons Series of silver rounds includes six unique designs of dragons from cultures representing various corners of the globe. Provident Metals offers you the fifth design in the series with the 1 oz Copper World of Dragons The Indian Rounds available for purchase.

Provident Metals offers the 1 oz Copper World of Dragons The Indian Rounds in brand-new condition. When you buy individual rounds, each one ships inside of a protective plastic flip. Multiples will ship to you with up to 20 rounds in a mint tube of in Monster Boxes of 500 rounds that contain 25 tubes. This is the fifth design in the World of Dragons Series with one final design to be released.

On the obverse face, 1 oz Copper World of Dragons The Indian Rounds feature a traditional Eastern depiction of the dragon. Cultures across the Indian Subcontinent and Asia often depicted dragons as snake-like creatures, as opposed to the flying beasts of European cultures. This long, powerful dragon guards the Taj Mahal in this design. The Taj Mahal was built between 1632 and 1653 by the Mughal emperor Shah Jahan for Mumtaz Mahal, his favorite wife.

The reverse side of Copper World of Dragons The Indian Round includes a common design element used on all releases in the series. This side includes the haunting gaze of a dragon eye. You can only see the one eye as it gazes directly at you with its scaled reptilian skin. Inscriptions on this side identify the series and the weight, purity, and metal content of the round.

The World of Dragons The Indian Round release is the fifth in the World of Dragons Series. The series launched with The Aztec design featuring Quetzalcoatl from Aztec mythology. Subsequent releases include The Welsh, The Chinese, and The Norse dragon releases identifying different beasts from other cultures around the world. Releases in this series are available for three months of production and then minting halts, creating a relatively limited availability.